To reach a wider audience, expand fact-checking to broadcast news

Fact-checkers don’t just have a misinformation problem. They also have an audience engagement problem.

As an International Center for Journalists TruthBuzz Fellow in the U.S., my job is to make the truth go viral. I work with organizations like the Raleigh News & Observer and PolitiFact to create more engaging content that reaches people where they are already listening, reading or watching.

To do this, I have built fact-checking partnerships with broadcast media organizations. Working with broadcast is one easy way to spread the truth farther and faster.

Expanding broadcast fact-checking reaches audiences where they are

While most fact-checking in the U.S. occurs in the digital realm, there’s room for expansion with radio and television. Broadcast mediums offer new audiences for fact-checkers.

Broadcast news consumption is widespread. A 2018 Pew Research Center survey on American media consumption habits in December 2018 found that 49 percent of Americans got their news through television, and 26 percent through radio. These numbers taken together are significantly higher than for websites and social media — just 33 percent and 20 percent, respectively.

Fact-checkers need to expand their efforts in broadcast journalism to meet the majority of audience members where they are, rather than requiring them to embrace new mediums to access well-researched fact-checks.

Using broadcast journalism to fight misinformation has benefits outside the U.S. as well. Less than half the world’s population has internet access. In countries without reliable internet, radio and TV are the best way to give audiences factual content. 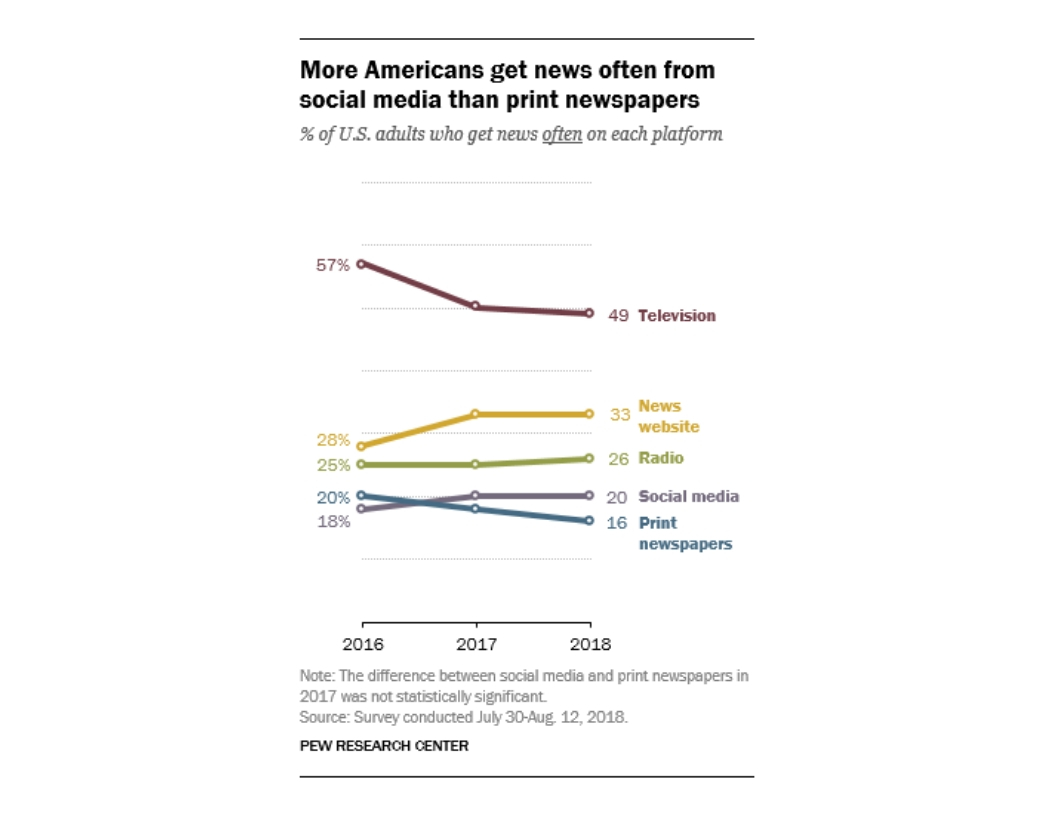 Local TV and radio are more trusted than any other medium

However, it looks different at the local level. American trust in local news is high.

The 2018 Poynter survey found that local TV is the most trusted news source today. Seventy-six percent of Americans say they have “a great deal” or “a fair amount” of trust in local TV news, compared to 47 percent for online news.

A 2018 iHeartRadio industry trend analysis found that listeners trust radio twice as much as social media, and 81 percent more than cable TV.

Knowing that Americans place a great deal of trust in local news means that it’s too important for fact-checkers to ignore. It’s also important to continue trust-building efforts, even when trust is high, and incorporating more broadcast fact-checks is one way to do so.

Let’s face it: written fact-checks today can be pretty wonky. Between the heavy use of jargon, large blocks of text and the inclusion of minute details, things get complicated pretty quickly. It’s an open secret among readers and fact-checkers alike that you can skip most of the reporting and scroll to the bottom to understand the gist of an article. Fact-checkers can do better by creating more engaging content for readers.

Writing for radio and TV news is different than print and digital. Broadcast writers use fewer details, write more conversationally and use fewer sources. When you see someone, or hear their voice, you can say more with fewer words. The audience pays closer attention — and for longer.

This type of writing can be adapted for digital-only articles, too. Reporters can simplify long sentences, and distill the information for the average reader. They can use less jargon, and write more conversationally in order to include more diverse audiences.

This doesn’t mean detailed reporting notes should be left out — due diligence is important when it comes to fact-checking — but these notes and details can be packaged separately from the main article to streamline the content for average readers.

Fact-checkers can also incorporate more narrative into their work to make it more engaging for audiences. A good example of this is the Tegna local TV network’s show Verify. In the first episode, reporter and host David Schechter takes local Texas viewer Sherman Powers on an Anthony Bourdain-style road tour of the southern border.

The main question they explore — whether the security provided by a border wall is more important than the rights of the landowners who are in the way — leads them to meet people who would be affected — positively or negatively — by President Trump’s proposed border wall. While talking with clergy, wildlife conservationists, and ICE agents, Schechter provides Sherman with factual evidence while also grappling with the local implications of a border wall.

Other options for fact-checking organizations would be to adopt a quick, bullet point format similar to Axios newsletters, or an explainer-style video like Vox News in its new show Today, Explained.

Fact-checkers just need to collaborate with broadcast organizations for a few minutes each week to reach more people. As part of my fellowship I set up a partnership between the News & Observer and two National Public Radio affiliates in North Carolina.

Every week, News & Observer fact-checker Andy Specht joins radio teams for a few minutes to give a quick recap of the biggest fact-checks of the week for WFAE Charlotte’s 220,000 listeners and WFDD Wilmington’s 118,000 listeners. Specht also occasionally joins local TV stations, such as Charlotte’s Spectrum station, to talk about fact-checking.

As it is now, fact-checking reaches a small audience of well-informed people. To fight the growing problem of misinformation, fact-checkers must evolve their content by collaborating with broadcast media to reach a wider audience and continue to build trust among diverse audiences.

Learn more about Riley and the TruthBuzz Fellowship on ICFJ's website. You can also follow his work — and the work of other fellows around the world — on Twitter using the tag #Truthbuzz.