Wearables, virtual reality and decentralized newsrooms are just some of the news innovations that are likely to go mainstream in the coming years. And it may happen sooner than you think.

The innovation team at BBC News Labs recently published a timeline of key future developments for technology and news, as well as recent milestones. The project, commissioned by BBC Director of News and Current Affairs James Harding, paints a picture of rapid technological change that will have a colossal impact on media and journalists in the coming years.

IJNet recently spoke to BBC News Labs hacker/journalist Basile Simon, 22, who led the project, about the timeline’s key projections. Here are the highlights:

IJNet: Can you tell us how you conducted this exercise? What was your process?

Basile Simon: Playing the pundit was actually a pretty funny act. I found it a bit paradoxical that they asked me, the 22-year-old kid, to look at a time when I was 10!

It was tricky not to get overwhelmed by everything that happened and might happen, but I reckon the hardest part was really to come up with something original -- and it's great that I was given a free license to be "bold." Everybody knows mobile journalism is going to rock our world. So my task was to formulate a real prediction. That was the exciting bit, as you can see the tech becoming very real in your mind.

IJNet: As you compiled this list, what were some of your biggest takeaways about the future of news?

BS: Last year, Matt Shearer, head of News Labs, gave another talk at an event put together by the same James Harding. He said that all the tech for the next few years, and for the next decade, is already here. Well, you know what? He's just spot on.

Virtual reality? My god, it's getting better and better every single month. Full decentralization of a newsroom? Check out reported.ly [Andy Carvin’s new First Look Media venture] for an amazing example. Stories written by robots? Hello, AP and Reuters. On-the-fly translation? Our previous hackathon about language tech showed us that it's not around the corner, it's already doable.

It's amazing that the ground has been laid so early. Mobile journalism has been here for almost a decade already -- it just wasn't smartphone-based, but started with FTP and editing on laptops.

The tech is there. The difference will be the willingness to try to use new stuff. 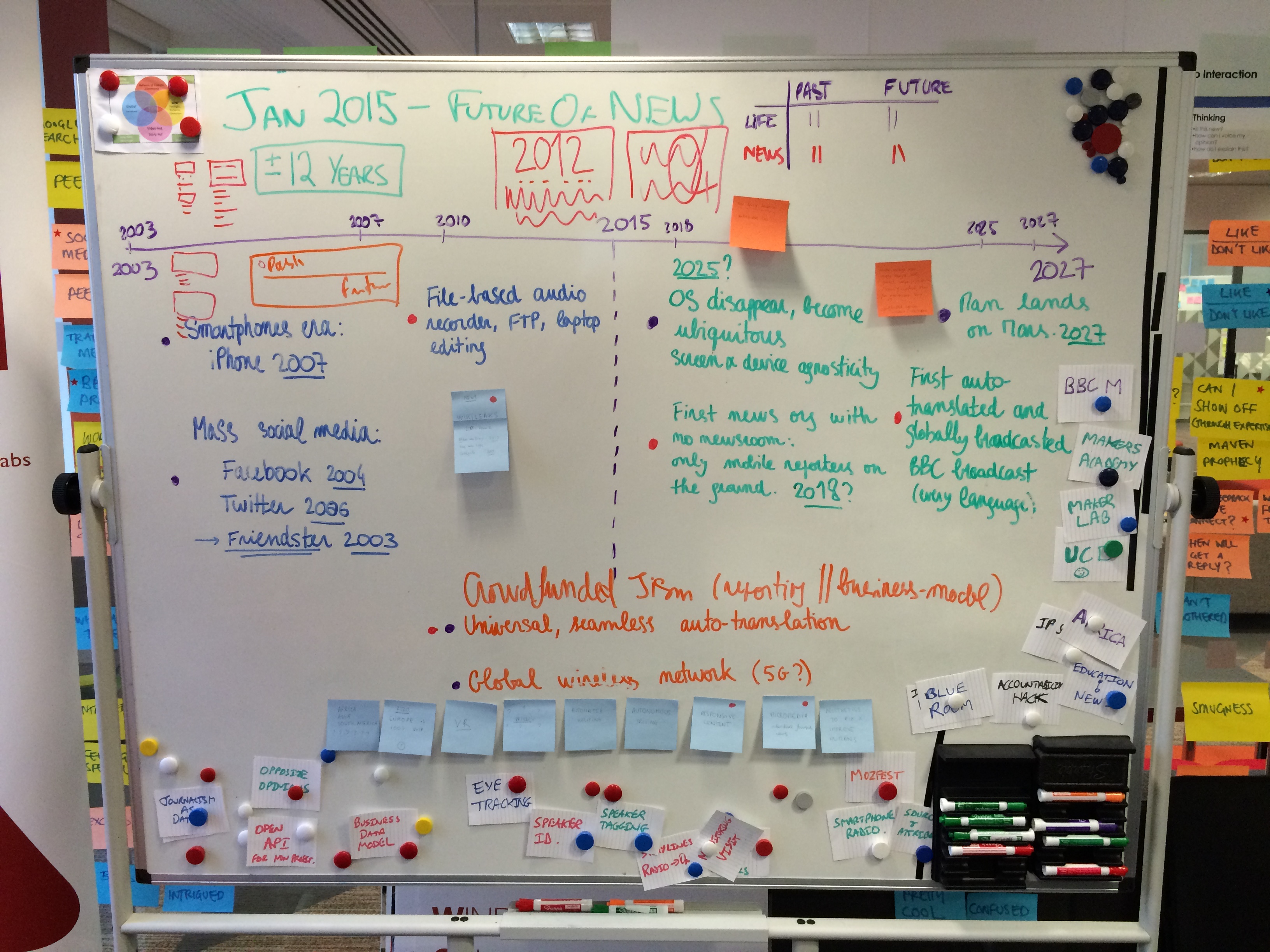 IJNet: Virtual newsrooms…how close are we?

BS: Once again, reported.ly. If you're not a 'classic' broadcaster--i.e. if you don't need fancy edit suites and satellite dishes, you don't necessarily need the central space. At least in the West, you can be online (almost) everywhere, with a phone and a data plan. And it's not even a synonym of bad quality: DSLRs are amazing, audio-recorders cost nothing and make great radio shows and podcasts... and imagine if you're lucky enough to be able to code your interactives and charts yourself! Do you really need an office?

So we’re close. The question is: is it viable financially?

The only thing I know is that I'd work for such a media company.

IJNet: Seems we’re pretty close with wearables, too. How do you think these products will be made accessible to a much wider swath of journalists in the next three years?

BS: Proper battery life. Quality and reliability. And either apps/solutions ready to go or an openness of the software so that nerds like us can make them great for our journos.

Once you have all that, it's about adoption, isn't it? I don't really picture Jeremy Bowen [a 55-year-old Welsh journalist and television presenter] running around with Google Glass or recording with his watch. But youth might adopt it; look at what Tim Pool is doing, it's just mind-blowing. I'd love to do that.

IJNet: How do you see autonomous driving, invisible OS and a man on mars fitting into the news and tech ecosystem of the future?

BS: I am not sure they will have an enormous impact on news, but they will change our life. Autonomous driving will revolutionize the way we think and live transportation, hopefully making us all safer. The invisible OS... that's the one I'm waiting for the most. Watch the movie 'Her,' that's just magnificent stuff. I've tried several fully immersive augmented reality experiments, and they felt completely crazy. This is even crazier! And Mars, well, that's the geek in me talking. I wasn't here when we landed on the moon, but I'd love to see us on Mars.