“Podcasting is its own medium and you need to adapt storytelling to that medium,” advised Siobhán McHugh at the start of a packed hour-long workshop hosted at the 2017 GEN Summit in Vienna.

The session, which ran twice as long as scheduled due to attendees' enthusiasm, identified a series of recommendations for journalists looking to move into the audio arena.

Here are seven top tips for those looking to unlock their podcasting potential.

Unlike print, audio stories “can’t be black and white” beholden to “the inverted pyramid.” Instead, think of audio as “more like a good book.” One that’s rich in characters and a space where complex stories are allowed to breathe.

The beauty of the podcasting format is that episodes – and series – can be as long as you want. “Narrative drives the structure,” McHugh said, meaning you need never feel beholden to a restricted 800-word count ever again.

2. Podcasting is not just people talking

“Sound is what makes audio compelling,” McHugh advised. “If you're in the Philippines, I want to hear the liveliness,” she said.

McHugh recommended that storytellers start to build their own sound archive, by capturing evocative audio – like church bells or children playing in a playground – which, when we hear it, can immediately transport us to a particular place.

No time for that? Then check out Freesound, which describes itself as a “huge collaborative database of audio snippets, samples, recordings, bleeps, released under Creative Commons licenses that allow their reuse.”

3. Think with your ears

This is the only sense that podcast listeners can use, so make it count. “Always wear headphones when recording audio,” McHugh said, and always ensure “interviews are made to the best audio quality.”

That matters, because in podcasts you can only “convey emotion and connection to characters through audio.”

“When you hear the voice directly, there's an intimacy and connection that you do not get in print,” McHugh contends.

“Be authentic,” McHugh recommended, “talk as if talking to your best friend.”

Audio is all "about being companionable," so don’t try and emulate the style and delivery of a radio newsreader of sports reporter.

“Speak like you talk,” McHugh reminded us. “Emotion comes from [real] voices and that makes people care,” she said. You won’t provoke that response if you’re faking it.

“Audio is a communication form where, at its best, art meets journalism,” McHugh memorably counselled.

Storytellers can build intimacy through more than just natural sounds and well-recorded interviews.

“Some of the most potent things in audio can be the silences,” McHugh suggested, adding that you can also use commercial breaks as a punctuation point in your narrative (as TV has done), rather than thinking of it solely as a necessary evil. 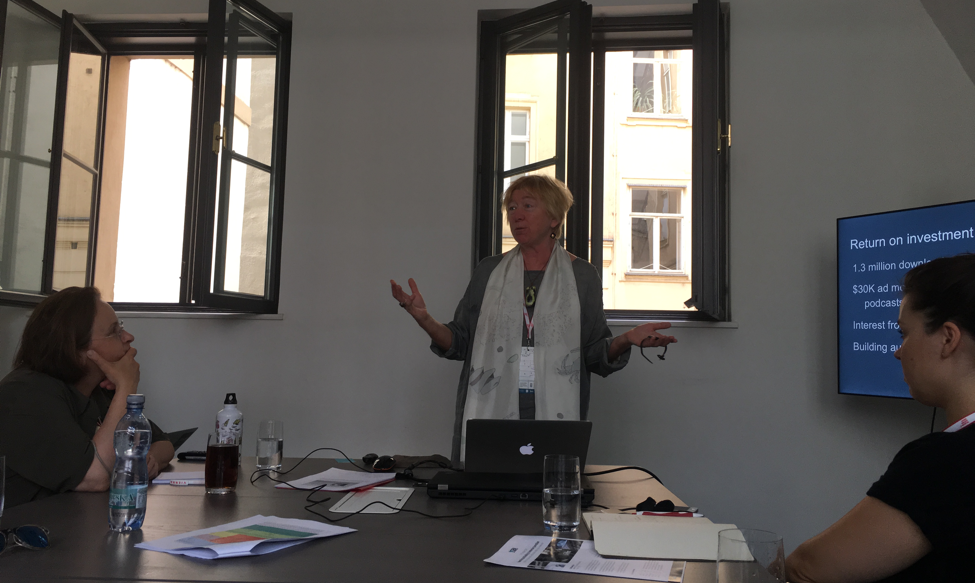 “I’m desperate to see podcasts in languages other than English take over,” McHugh said, noting the dominance of English-language podcasts from the likes of broadcasters like NPR, the BBC and newer entrants like Gimlet and Radiotopia.

She highlighted Der Anhalter (i.e. The Hitchhiker), a German-language podcast produced by WDR (Westdeutscher Rundfunk) as a recent exception.

In many countries, podcasts related to churches, comedians and crime are the most popular. The real-life crime genre enables us to “vicariously experience the dark side of human nature whilst we are safely in our pajamas.”

Serial, the most high-profile proponent of this format – and arguably a game-changing show for the whole podcast medium – has enjoyed over 250 million downloads worldwide, McHugh said.

If you’re a fan of The New York Times’ podcast, The Daily, then it’s interesting to note that the Gray Lady hired six audio people to help host Michael Barbaro put the show together, McHugh revealed.

In her own work, McHugh was recently part of the six-person team which produced together the award-winning podcast Phoebe's Fall.

Described as “a major investigation by The Age newsroom in Melbourne, Australia, into the death of Phoebe Handsjuk, who was found at the bottom of a garbage chute in a luxury apartment building,” started as a story in the newspaper.

The show, which has so far enjoyed more than 1.3 million downloads, and attracted US$30,000 in ad money from General Electric, has had a discernible impact. It won national and international awards, triggered a review of the Coroner’s Act by the Victorian Government and encouraged journalists at Fairfax Media to explore other podcasting opportunities.

With other smaller publishers showcased by McHugh – ranging from The Detroit Free Press to The Des Moines Register and The Atlanta Journal-Constitution – also producing their own brand of podcasts, are you ready to follow in their footsteps?

He filed this from the Global Editors Network’s seventh annual GEN Summit, which took place June 21 to 23, 2017, in Vienna.