Nonprofit tests new way for journalists to listen to their communities

Journalists aren’t always the greatest listeners. Yes, it’s kind of in the job description, but sometimes selective listening, not to mention selection bias, can warp what messages actually reach their ears — and their stories.

What if a journalist could be a fly on the wall in residents’ conversations about community issues? Or maybe just a smart speaker-ish device sitting at the center of the discussion table, about the “size of a hug”?

Cortico, a three-year-old nonprofit working out of the MIT Media Lab, has been developing a high-tech listening network for communities and local newsrooms seeking to tune in. The Local Voices Network is made up of people who gather around Cortico’s devices, which it calls “digital hearths,” for conversations. (They look a bit like tiny lazy Susans, a bit like flying saucers someone made in shop class.) The nonprofit has raised more than $10 million so far from the Knight Foundation, Craig Newmark Philanthropies, Reid Hoffman, and more.

Here’s how it works: Selected members of a given community — not a random mix — voluntarily sit and discuss a particular topic like policing or climate change. They’re led by a trained facilitator while that warm and fuzzy digital hearth sits in the middle and, you know, listens. The facilitator can also play back snippets from other conversations for the participants to discuss, too. (Gotta burst those bubbles!) Their conversations are then coded by a backend system so that local partner journalists can get a sense of what those normal humans are talking about as background for their own reporting, or for future source connections.

Our goal is to bring the perspectives and concerns of ordinary citizens to light, as a way to connect members of a community to one another; to promote civic engagement; and to encourage journalism that reflects and responds to local issues.

“The core concept of the Local Voices Network is described as community-powered understanding,” Deb Roy, the cofounder of Cortico and director of the Media Lab’s Lab for Social Machines. “The source of power is the people in the community volunteering to foster these sorts of conversations and have them be accessed by trusted local media partners.”

Cortico has been developing the hearths and tools to parse through the substance of the conversations and find the snippets to “cross-pollinate,” as cofounder Russell Stevens described it, building up from the 2016 election and their Electome project. Electome used machine learning and other AI techniques to identify the tangible issues being discussed on Twitter and try to nudge journalists away from the horserace. (Roy was Twitter’s chief media scientist from 2014 to 2017.) But the last leg — connecting what users were worried about to what journalists were reporting on — was shaky, as the tool was a bit involved than someone on a daily deadline might find useful. But they found that the human-to-human connection was actually more useful than the dumpster fire of exchanges that can be found in too many places on Twitter.

“Our model has shifted to the value of there being human listeners there physically present,” Roy said. He sees the technology as a scaffolding or support structure for the actual dialogue, rather than relying on it to foster healthy debate in the first place: There’s a “shift in the role of the technology in the division of labor in creating a new kind of public conversation.”

Okay, but isn’t the setup a bit overkill? Can’t you just use your phone to record and play back these interactions? Do you really need NLP to pick out trends in what a small group is talking about? Maybe not, but listening is generally a good thing, especially going into the 2020 election. Cortico’s team is working with Kathy Cramer at the University of Wisconsin, a political science professor and the author of The Politics of Resentment: Rural Consciousness in Wisconsin and the Rise of Scott Walker, and the local Capital Times. The Madison Public Library is also a partner — that’s where the hearths are stored, and they’ll be working together on assessing plans for a new community center. They’re also expanding the Local Voices Network — essentially where Cortico’s technology is used, conversations are hosted, and media partners have access — to Boston, and Birmingham, and the Bronx this year.

When a Local Voices Network conversation is in action, a host (a member of the local “Conversation Corps” who has gone through Cortico’s training) checks out a hearth from the library. The host organizes a group of people from their own life to participate in the conversation. They get the group talking about life in Madison (or wherever they are) and eventually turn to deeper questions — all with the hearth on and recording. It isn’t meant to be a focus group; the residents, who are doing this for free, are hopefully getting as much out of the process as the journalists or the data scientists analyzing the transcript’s trends after the hearth gets returned to the library.

Cap Times reporter Abby Becker has guinea-pigged a few articles using Cortico. “This is helping community members understand issues and more about each other and move ideas forward in a way that isn’t so negative that we see on Nextdoor or Facebook comments or little Twitter battles,” she said.

But she found it tricky to translate the conversations into much more than a collection of quotes, and the audio material she had to sort through was limiting. She’s written several collage-type articles pulling together quotes from a few conversations (here are a few examples), and Cortico has plans for how the LVN insights can be used in more reporting formats. 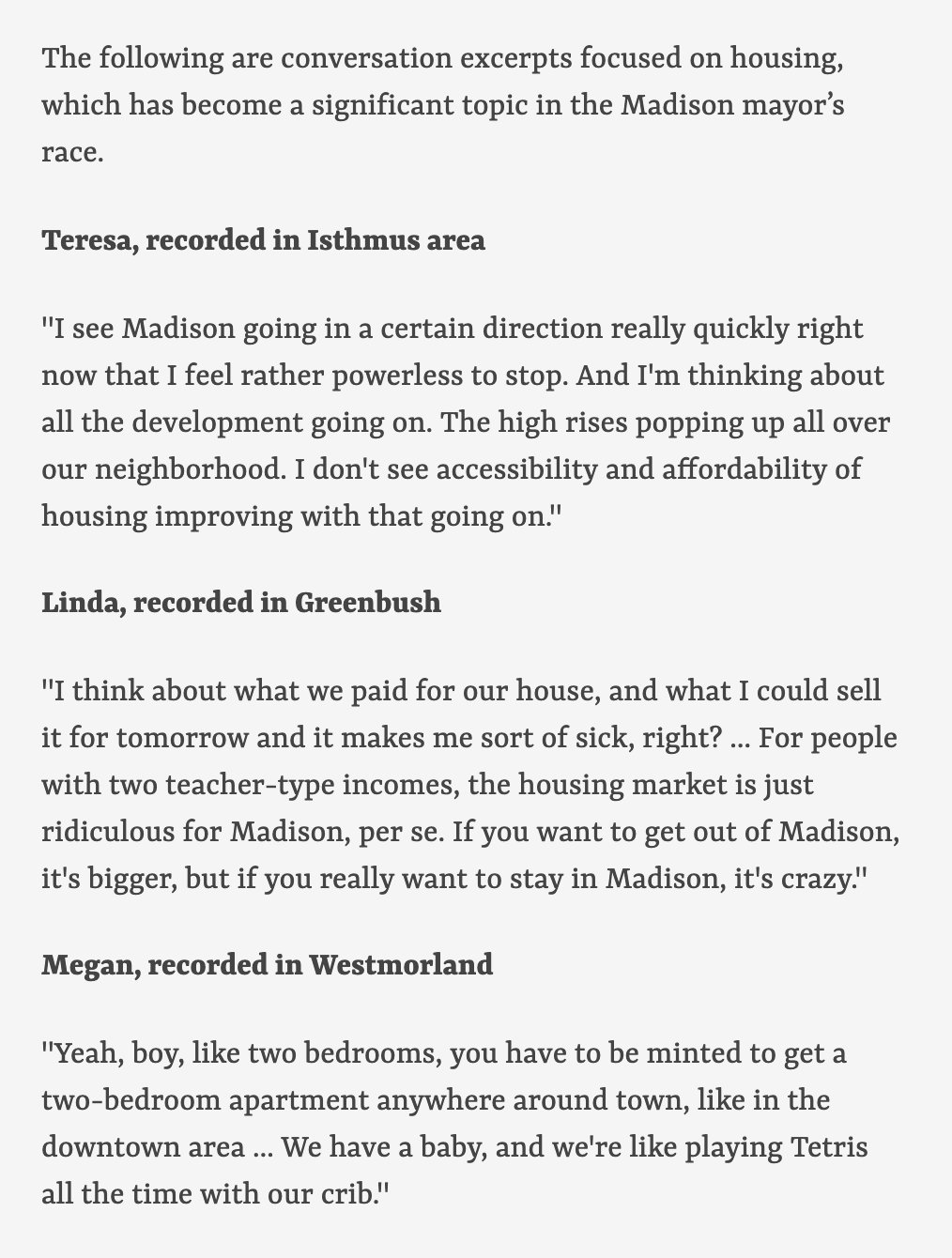 Can a reporter — or an algorithm — listening to some of the conversations identify a common thread that people are wondering about that the reporter can then investigate? Can the conversation participants be contacted as sources in the future?

“[The collage-style articles] is a terrifically valuable kind of storytelling because it is actually surfacing underheard voices in the dialogue,” Stevens said. “The next level would be incorporation into stories they’re already planning or using that to determine their next reporting.”

People from Madison I spoke to who were unaffiliated with the project weren’t surprised — or maybe just weren’t as jaded as me — that residents voluntarily took the time to participate in something like this without incentives. (I was thinking about the compensation City Bureau provides to its Documenters for attending and recording public meetings, for example.) Apparently people in Madison do it for plain old fun.

We’ll see how the model adapts as Cortico expands. The team will work with libraries and several local outlets, including the Craig Newmark Graduate School of Journalism at CUNY, The Boston Globe, and AL.com, as well as hiring a journalist via the aforementioned Knight grant. The nonprofit is also looking to crisscross the state of Wisconsin with a regional media partner and continue seeking local philanthropic support as it matures.

“We have made a public commitment to not monetize the actual data that is being accrued through LVN,” Roy said. (Though they might use the sale or licensing of Cortico’s tech stack as a financial booster in the future.) “There’s value in knowing what people in the community [have as] public opinion and what’s on the mind of the public. We’re not going to look to that as a source of revenue.”

Twitter littered the 2016 election news cycle; perhaps the next frontier is your own kitchen table, with a local friendly hearth listening nearby.