During the Ebola outbreak in Nigeria in 2014, a Nigerian king posted a message on social media, suggesting that people drink salt water to protect themselves from the deadly virus. Many rushed to markets to buy salt as a result.

As soon as the government got wind of the information, it asked Nigerians to disregard the speculation, and reiterated that there was not yet a cure for the disease. Officials instead urged citizens to keep their environments clean, and maintain personal hygiene to guard against contracting the virus.

But it was too late: many Nigerians had already decided to drink and bathe with saltwater solution. One week later, two Nigerians were reported dead, and another 20 were hospitalized due to excessive consumption of salt water. The deceased were believed to be hypertensive, a condition especially sensitive to high salt intake.

Social media has tremendous power to rapidly spread information, whether accurate or inaccurate. This influences behaviors, at times leading people to make ill-informed decisions that lead to unintended consequences.

The International Centre for Investigative Reporting (ICIR) wanted to combat this. In 2020, it launched the FactCheckHub to fight back against misinformation. The initiative aims to foster a fact-checking culture among the public through an online platform that houses factual information, according to the Factcheck Hub’s team lead, Bamas Victoria.

The ICIR has long been interested in dispelling misinformation, Victoria explained. This informed its decision, for instance, to launch the collaborative verification project, CrossCheck Nigeria, ahead of the country’s 2019 general election. “Our intention was to assist members of the general public in making informed decisions and holding the government accountable,” she said. “Since its inception, the Hub has helped the public make informed decisions by fact-checking claims put out by Nigerian politicians, religious leaders and the public.”

This is why the ICIR launched a full-fledged fact-checking operation in response to the increased misinformation circulating during the pandemic, she added. In addition to English, the FactCheckHub has amplified fact-checks in several indigenous languages, including Igbo, Hausa and Yoruba on different social media outlets as well as YouTube to reach a wider audience.

[Read more: Strategies for countering the spread of misinformation]

It has successfully dispelled misinformation on social media, including this false claim that the Nigerian Customs Service had recruited criminals, and this claim that the late Abba Kyari, Nigeria’s Chief of Staff was flown to the U.K. for medical treatment, and his body later cremated when he was still alive.

The Hub verifies factual claims, too, including this one by the Secretary to the government of the federation, Boss Mustapha, who in July said that Nigeria accounted for five percent of COVID-19 deaths in Africa.

According to Victoria, the ICIR has held workshops and webinars, and produced tutorials intended to increase the public’s knowledge on how to spot false information, and to equip them with the knowledge needed to sift through the large amounts of information they are exposed to online.

The Hub also encourages the public to submit claims they want fact-checked through Whatsapp, or by filling a form on the website. Journalists then fact-check the claims and publish their findings.

Despite the Hub’s successes, Victoria noted that it’s difficult at times to access credible data for the work. “There is also the challenge of getting some government institutions and agencies to respond to queries or make data available when the need arises,” she said. 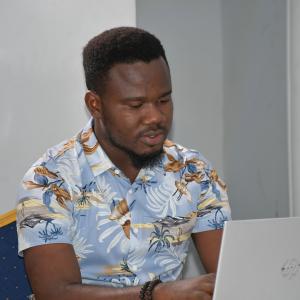