The International Women’s Media Foundation (IWMF) has launched Reporta, a security app that, with a touch of a button, can signal an emergency. It utilizes the power of a device common to journalists worldwide -- a mobile phone.

The easy-to-use tool is available free on iPhone and Android devices in Arabic, Hebrew, Spanish, French, Turkish and English. The timing couldn’t be better.

The New York-based Committee to Protect Journalists reports that this is the most deadly and dangerous period for media professionals in recent history. More freelancers are covering conflicts with scant protection or support. Extremist groups like the Islamic State, also known as ISIS, are targeting the press.

IWMF describes Reporta as “the only comprehensive personal security app available worldwide created specifically for journalists.” A check-in feature is at the heart of the new safety tool.

The app enables journalists to contact editors, colleagues or family members who can take action at the first sign of trouble. And that, says security expert Frank Smyth, could be a lifesaver.

“There is no better tool I know of to enable both contingency planning and emergency response for those operating in high-risk environments,” says Smyth, founder and executive director of Global Journalist Security.

Smyth served as consultant for the IWMF project along with the International Center for Journalists, Rory Peck Trust, Article 19 and other media watchdogs.

During a demonstration of the app in their Washington, D.C., office, IWMF executive director Elisa Lees Muñoz outlined the three key functions of Reporta:

“Journalists know their own situation; they know what their protocols should be, how often they need to check in, and who to check in with. It is totally up to them,” explains Muñoz.

“We are really trying to feed into the culture of `safety first’ and keep it as simple as possible. The app is very easy to use.” 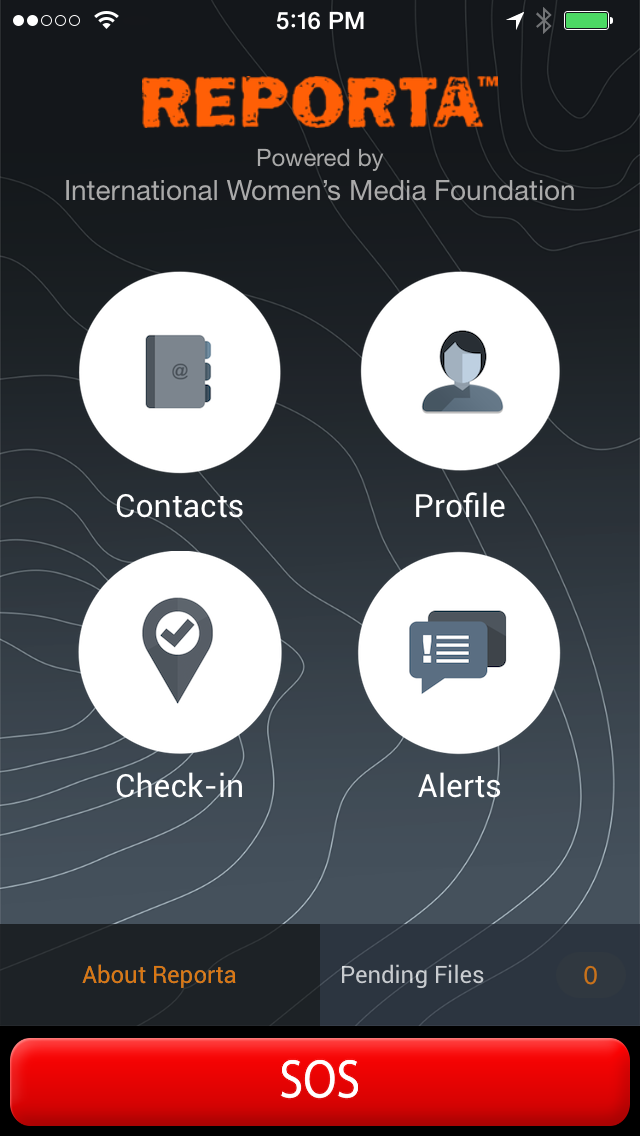 A four-minute video walks users through the setup process and issues a reminder: Reporta is not an emergency rescue service and does not alert authorities. Journalists control notification through their contact list, which they can categorize into private, public or social circles – these contacts can be editors/family members, journalists working in a similar environment, or Twitter and Facebook followers, respectively.

How secure is Reporta?

Among the safeguards, IWMF cites a strong user password requirement, data encryption during transmission and a two-step authentication for server access. Users’ personal identifiable information will be systematically purged from the app’s database to keep the amount of sensitive information stored there to the bare minimum, according to Muñoz.

There is another stopgap: The app shuts down when a user sends an SOS message or fails to check-in. The app cannot be reopened until the journalist enters an “app-unlock” code supplied by a pre-selected contact on their check-in list. This prevents intruders from accessing names or other material stored on the Reporta app.

All data sent via Reporta is encrypted and stored behind a secure firewall on a dedicated server using “the highest level of protection that you can purchase,” says Muñoz. “There also are dual servers, so if one goes down, the other will automatically kick in.”

iPhone users require iOS version 8.0 or higher and Android users require version 4.0.3. Users must have Internet access either via mobile data or a Wi-Fi connection. Journalists entering areas where there is no cellphone service are advised to turn off the check-in function and restart when they come out.

Reporta was funded by a grant from the Howard G. Buffett Foundation and built by RevSquare, a digital marketing agency. The app was tested by journalists in Africa, Latin America, the Middle East and the U.S.

There is an added benefit. IWMF plans to use Reporta to track trends in safety threats among users, including incidents faced by women journalists. An IWMF global study found that nearly two-thirds of women in media had experienced intimidation, threats or abuse in the line of duty.

“The app is for all journalists, but created with women in mind,” says Muñoz.