Join us in creating a data journalism guide for Latin America

It all began with a conversation at a conference among a group of Latin American journalists about the National Institute for Computer-Assisted Reporting (NICAR) mailing list and the Data Journalism Handbook (an initiative by the European Journalism Centre and the Open Knowledge Foundation).

With a little envy and tremendous admiration, most of us agreed it was amazing that journalists, developers and designers from the U.S. and European hacks and hackers community communicated so often. They shared ideas, tools and advice, and even got together to start the collaborative writing of the Handbook at MozFest in 2011.

Meanwhile in Latin America, we had the opposite scenario: very few networks of journalists, little communication among them, and almost none with developers and designers. Lack of trust was a key impediment to helping each other improve our data journalism methods and embrace innovation in newsrooms. On top of that, although we have great journalists in our region, most of them do not speak or understand English (the language of most of the relevant tools) so there is a huge digital literacy gap.

In our conversations about the Data Journalism Handbook, one topic stood out from the rest. In the U.S. or England, obtaining relevant databases to research and report stories can be a simple matter. But in the local contexts of our Iberoamerican countries (from Mexico to Patagonia via Brazil and Spain) we find radically different situations when it comes to public data access, campaign funding, laws about press freedom, transparency, access to information requests, government open data policies, and high to low security risk levels for journalist and hackers.

So we asked ourselves: How do you do data journalism when getting the data is not easy, the tools are in another language, the networks are scarce and you have very different situations from country to country?

“We need to forge our own path,” we all agreed. 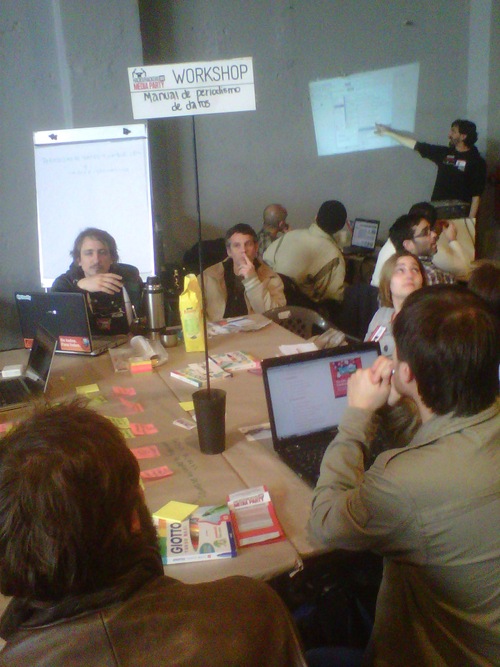 In order to do that, in October 2012 we held a brainstorming workshop at the HacksHackers MediaParty in Buenos Aires. After the event, we continued the conversation through a mailing list. We spent months working toward something that becomes a reality today. We are officially launching the collaborative writing of the Iberoamerican Data Journalism Handbook.

This project will be written in our own languages by volunteer journalists, developers and designers from Mexico to Patagonia and Spain, with the mission of showing the state of data journalism in Iberoamerica, explaining how to do data journalism in our countries, improving our networks of communication, helping our community accelerate its learning and providing it with the tools to do better journalism.

JOIN US AND HELP US CREATE THE MANUAL

Already 64 people have joined the project and will collaborate on matters such as writing, designing, coding and promoting the handbook. You can be part of it too. Sign up using this form, and we will send you a simple questionnaire about your skills for you to fill out and send back to be edit as part of the material for the Manual. (If you don`t have enough time but would like to be part of this growing community, sign up for the mailing list).

I will be coordinating this collaborative project as part of my Knight International Journalism Fellowship. Other Knight International Journalism Fellows will contribute as well. Sandra Crucianelli will write about deep Web investigation, database-driven journalism and setting up data journalism teams in newsrooms. Jorge Luis Sierra will contribute chapters about security and cybersecurity. And Mariana Santos will develop guides on data visualization.

Our roadmap for this initiative is six months long. It starts with the writing between March and May, continues with editing the Handbook in June and July and ends with the launch of the Handbook in August 2013. By then it will be released under a Creative Commons Attribution-ShareAlike 3.0 Unported license on the Web and in ebook versions (and in print, if there is a publishing company or university interested in publishing it).

SHOWING OUR WORK ON THE OPEN WEB

The Iberoamerican Data Journalism Handbook is intended to be built in the open. We tell you how it started as an idea around a few beers, show you the sketches and wireframes we did for the first version of the site, and as much as possible, use open source and free tools to develop the project.

The website is designed using Bootstrap, is built on top of the lovely open source Web App Template, rolled out by the first-rate News Applications Team from NPR, and everything is hosted for free at Github. Our blog is a Tumblr. The forms and mailing list are made using Google Drive and Groups. When we start editing the Manual, everything will be available at ReadTheDocs and Github. And if we need to have community meetings we will use Etherpad in the open (props to the Mozilla Open News community for all the ideas we stole from you).

We expect this project to be fun, joyful and intense. The culmination of this project will be the PeriodismodeDatos.org, a much-needed Spanish-language data journalism toolkit and online community that will learn from the Handbook experience and will be a place for featuring projects, sharing tools, code, expertise and training resources.

While we are still looking for funds and alliances to support all this, our creed is that nothing gets done if you just sit around waiting for money. Instead we are going with the philosophy that “done is better than perfect.” This is especially true with such an awesome Iberoamerican community being born and growing as you read this.