Once upon a time, storytelling may have been defined by the use of words, images or video.

But by using digital innovations such as games the Interactive Team at Fusion, a television and digital network, refuses to consider storytelling as creating content for mere consumption; the innovators want to change the way people interact with stories.

“As Fusion says, it’s all about the fusion,” said Mariana Santos, the interactive and animation director for the team. “We want to fuse some of the core principals of technology and an editorial and data team with design and narrative.”

The interactive team is the newest addition to Fusion, a joint venture between Univision Communications and the Disney/ABC Television Network. Santos and her team shared updates on their latest projects during a Hacks/Hackers Miami Monday meet-up at Fusion’s Doral headquarters.

Santos is not only changing journalism in Fusion’s newsroom. During her time as a Knight International Journalism Fellow through the International Center for Journalists, Santos created Chicas Poderosas, a movement to empower and train women to be more involved in newsrooms throughout Latin America.

Previously, Santos worked as a member of the interactive team at London’s The Guardian. When Fusion offered Santos her current position, she asked to bring along her team: Miguel Costa joined as a user experience and user interface designer and Kit Cross as an interactive developer. 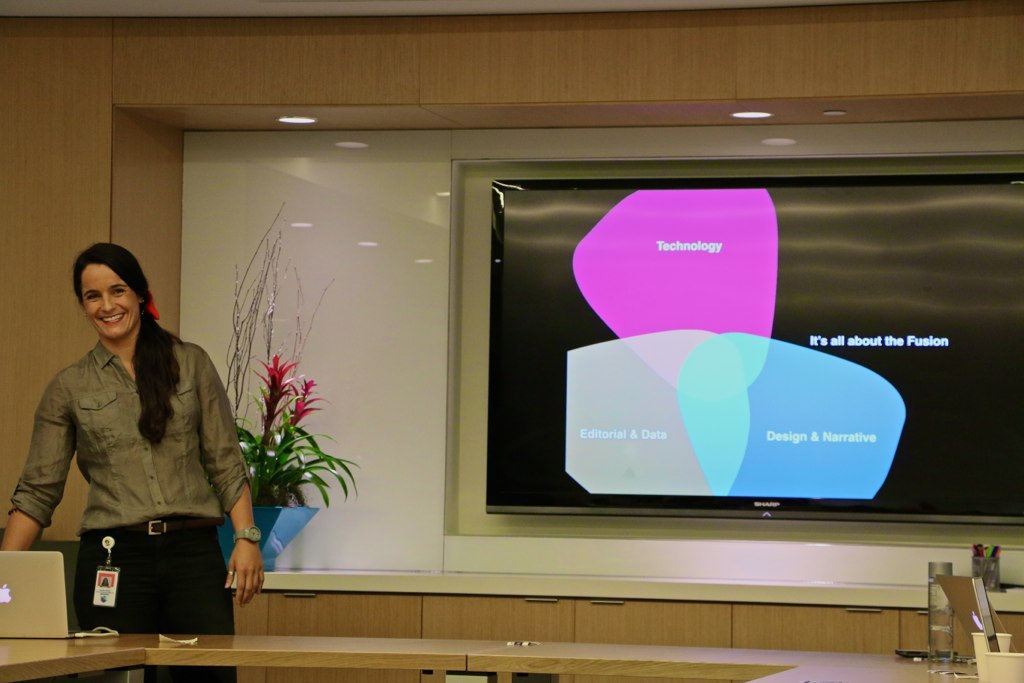 Since then, the team has been trying “to bring a little bit more of art style, cinematic and multimedia tradition into online news, making the news more engaging,” Santos said. Fusion projects have used unique storytelling techniques, including a project with The New York Times.

The New York Times Magazine has been excerpting Jake Halpern’s new book “Bad Paper: Chasing Debt From Wall Street to the Underworld.” In a collaboration with the magazine, Fusion’s team designed “Bad Paper: The Debtor Game,” a digital game/platform that allows users to better understand debt.

Santos said Fusion is a “startup environment.” So when considering whether or not to take on a project, such as “Bad Paper,” the team considers several variables.

“One of the things I really need to be convinced about is about how many people is this project going to touch. It has to be something that has social traction because you need the viewership,” said Daniela Stepensky, Fusion’s head of product.

For Santos, a project is worth pursuing if “the data is complete and interesting and tells you something that you otherwise wouldn’t know.”

According to Hacks/Hackers Miami co-founder Dan Grech, Miami has much to learn from the interactive team’s creativity.

“Fusion is bringing the most extraordinary international talent to Miami. The impact of Fusion is going to be so much bigger than just what you do for that website and that media organization,” Grech said as he addressed the interactive team. “You’re going to change journalism in Miami.”

This post originally appeared on the Knight Foundation blog and is published on IJNet with permission.