When and how can drones be used to improve storytelling? What are the rules that apply in different jurisdictions?

A group of South African journalists and civil rights organizations tackled these and other questions recently at the country’s first drone camp, a three-day, hands-on event in Cape Town organized by ICFJ Knight Fellow Chris Roper. The 30 participants included journalists from 12 of South Africa’s leading media outlets, and for most, it was their first time flying the unmanned aircraft.

“Drone journalism, like any new practice in journalism, is important because it forms a part of the evolution of our industry,” said Siyabonga Africa, digital media specialist at the South African Broadcasting Corporation (SABC), who took part in the camp. “From the way we can immerse audiences in our stories to showing new angles in pieces, drone journalism has provided a new lens with which we can see the world and report on it.”

Roper, who says the journalists are eager to start working with drones, talked to IJNet about exciting prospects as well as the regulatory challenges they face.

IJNet: What were your goals for drone camp? What motivated you to hold the event?

Roper: The idea for drone camp was to teach the journalists to build and fly drones and then to allow them to decide what form of journalism was appropriate to the stories they wanted to do and the audiences they wanted to serve. We gave them a taste for the amazing things you could do with drones in terms of journalism, and provided loads of case studies and talks from people who had produced those projects.

Newsrooms in South Africa are running out of resources to do big investigative pieces that involve either sensor journalism or mapping journalism. It’s quite difficult to get them to evolve in their use of innovative technology products and projects, so we wanted to kickstart that. What’s happened in my last 20 years of trying to get newsrooms to adopt digital technology and digital media strategies is that they’ve often come to the party too late, to find that their revenue base (not to mention their readership!) has been eroded by technology companies like Facebook. I want them to play a role in determining what drone journalism actually is, rather than leave it to non-journalists who happen to be early adopters.

What kinds of stories do you envision reporters in South Africa being able to produce with drones?

There’s a project called “Unequal Scenes,” by Johnny Miller, which is basically drone journalism around the divide between poorer and richer areas in South Africa. … We want to enable newsrooms to be able to tell those kind of stories where the visual actually tells the story, and then the reporting is done around that.

We already have 15 story proposals from newsrooms who want to work with us, on projects ranging from tracking mine dump radiation, to using drones and software to be able to estimate crowds at protests. South Africa has recently had a big round of protests where journalists were basically abused … and kicked out of areas so, as you can imagine, it’s very difficult to estimate crowds and attendance at these kinds of protest marches.

What challenges do South African reporters who are interested in working with drones face?

It’s very, very difficult to get a commercial drone license in South Africa. Currently, I think only seven people have one. About 120 people have applied for licenses and the South African Civil Aviation Authority is issuing licenses very slowly. Someone told me the rate was something ludicrous like one license per month, which means that you'll never get enough people with licenses unless something changes. It’s also quite expensive. It costs about US$7,000 to US$8,000 (or ZAR100,000 to ZAR120,000) to get set up so as to get a license. Excluding hardware costs!

Part of the aim of this drone camp was to try and mobilize all the newspapers and the news teams to start lobbying for a change to these laws. I invited them all and gave them free drones, and a taste of the potential of drone journalism, so that they would get invested and go back and fight to try and get some drone licensing rules changed. Or at least come up with some creative workarounds.

Do you plan to hold a follow-up drone camp? If so, how do you see the program evolving in the future?

Interest in this drone camp was so high that so we’re going to do a second one in Johannesburg in September. We learned quite a lot about how to do it better. … I want to find more local African speakers for starters. We did have the best, the guys who’ve really pioneered drone journalism, talking, but one of the most well-received speakers was Dickens Olewe from Kenya. He had a slightly different way of looking at potential and possibilities than the guys who were selling the dreams from San Francisco and the U.K.

I would also have more flying time throughout the three days, because it’s fun to fly these things around and crash them. It’s just amazingly cool, in that tech geek kind of way, especially if it’s your first time flying one.

Check out photos from drone camp below: 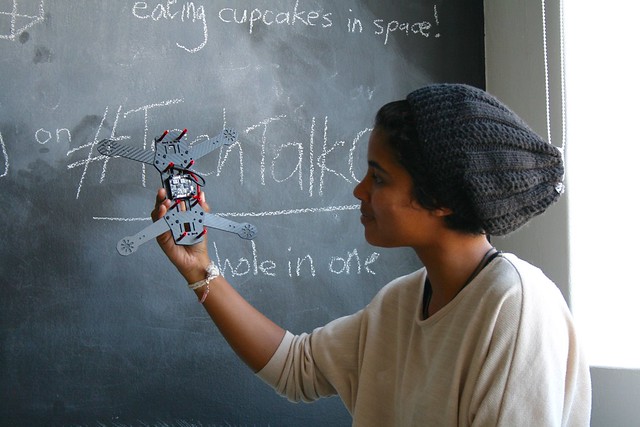