Examining The Mighty's unique approach to storytelling about disabilities

Longtime journalist and digital executive Mike Porath took a personal struggle and turned it into a media site that’s being read by millions.

When Porath and his wife discovered several years ago that one of their three young children had a rare chromosome disorder, it became a “life-altering experience,” he says. After the diagnosis, they sought out treatment for their daughter and comfort for themselves as their family adjusted to the news.

Talking with other parents facing similar circumstances made an enormous difference in their outlook and prepared them on forge on, Porath says. But these interactions were in-person. Digitally, there was no equivalent. WebMD can help patients and their loved ones dig into the medical side of their health ailments but not the mental and emotional side.

“There didn’t seem to be a site out there helping people the way my wife and I were being helped,” he says.

So Porath decided to create something that could provide that support. The Mighty, which celebrated its first year in mid-April, is the result. Porath’s experience working for ABC and NBC News, The New York Times and other major news organizations on both the editorial and business sides equipped him to create a full media company from scratch. The time between idea and implementation was just six months, as friends in the media business pitched in to get the effort off the ground.

The Mighty is “built based on stories,” Porath told IJNet. There are hundreds of essays, blog posts and listicles -- many from a first-person perspective and highly personal -- about the struggles and triumphs of people facing diseases of all kinds, from eating disorders to autism.

“Ultimately we want to improve the lives of people facing disease, disorder and disability,” Porath wrote in a post explaining The Mighty’s goal. “This is not a small ambition.”

The site’s Editor-in-Chief Megan Griffo, who previously led the Huffington Post’s Good News vertical, said she sees The Mighty as a space designed to help people with an ailment or disability or someone close to them cope.

“Whether that’s finding others going through it or whether that’s sharing their story,” she says. “Even if it’s just making them feel like they’re not alone. The way we help people face these conditions is by sharing and telling stories.”

Initially, when Griffo was hired to head up the editorial side, she pictured The Mighty as being a feel-good site where all of the writing was encouraging and upbeat. But the site has become something larger than that. While some posts have a positive message and beam of hope, others are accounts of tragic events and have melancholy or frustrated undercurrents.

“It’s turned into people sharing whatever they’re going through, good or bad,” she says.

Building a formidable community -- and fast

So far in its first year, The Mighty has racked up some impressive numbers:

The Mighty has a small editorial staff that writes some reported pieces and lists. But the “meat of the site,” in Griffo’s mind, is the contributed work. It comes from moms who blog about their children, caregivers writing about spouses and on and on. Griffo says some of the posts are published on individuals’ personal blogs and reposted on The Mighty while others are written specifically for the media startup.

The budding media company also has partnered with nonprofits, hospitals, therapy groups and others in the healthcare space, which has boosted its reach and stature.

Amassing so many contributors, much to Griffo’s surprise, has not been difficult. 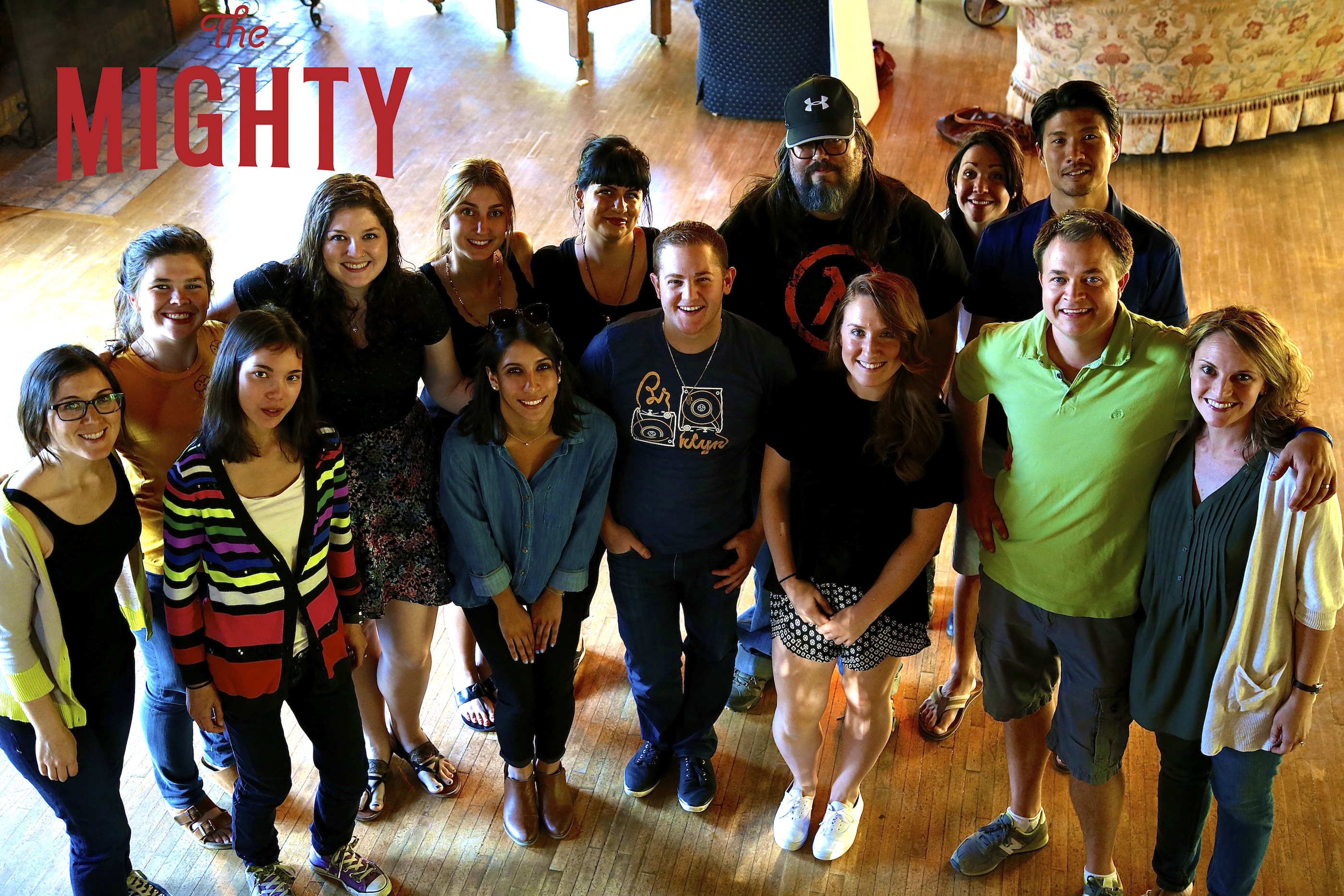 “When I started out I was emailing people out of nowhere asking them to republish. It quickly escalated to people emailing the stories themselves without me asking,” she says. “Then we broke into the mommy blogging sphere...My challenge now is finding people who actually have the conditions to write about themselves, not writing about a loved one. That’s harder to come by.”

To direct submissions, Griffo’s team also issues monthly challenges to the contributor network. They’ll ask for blog entries about a specific topic, such as the moment that made them see their disease in a different way.

When asked about their favorite pieces of content and the highest-performing posts during The Mighty’s first year, there are two that Griffo and Porath both independently mention.

The first is a staff-written story about a man who’s invented a font for people with dyslexia and then made it available for free.

“That one blew up for us,” Griffo says. “It was us not only telling a man’s story but it was also a service you actually could use, so it’s a practical way to help people.”

Another favorite came early in the site’s existence and was titled “My Daughter was Alive for 23 Minutes and Every Second was Beautiful.” Written by a mother whose child has a terminal defect called anencephaly, it’s a heartbreaker that Griffo says even caused her to cry as she edited it.

“It perfectly captures what it means to be a story for The Mighty,” she says. “It’s not a happy story. It doesn’t leave you feeling joyful and it’s not inspirational exactly. Someone went through something incredibly tough and found strength in that and found beauty in something as sad as losing an infant.”

Both posts have a timeless quality and continue to be read even though they’re months old. Griffo says she’s found that the best stories she comes across for the site also tend to have two other qualities: they talk about individual moments and are incredibly honest, not sugarcoating emotion.

Rather than writing about someone’s entire journey with a disability or disease, she coaches contributors to hone in on a specific exchange, a nagging thought they’ve been coping with or a single memory. That resonates most with the audience.

The site is beginning to include video and will only bolster these efforts going forward. Right now The Mighty has tried out posing a question -- such as, “What do you want others to know about Down syndrome?” -- and asking users to send back a video (below) with their thoughts. Then staffers edit responses. They’ve also produced an original video about obsessive-compulsive disorder that takes the viewer through a day in the life. More videos in both veins are in the works.

“There are a lot of misconceptions, especially in the mental health space, that we want to help break down,” Griffo says.

Porath is quick to mention that, while The Mighty has enviable readership, the effort has yet to even make a cent. That’s not a worry. The plan from the start was to feature unique, high-quality content that attracted a massive audience which would therefore attract investment dollars.

From here, the goal is to continue to attract more eyeballs to the point that The Mighty is literally one of the biggest sites around. Porath says the business model will be advertising-based but he’s not yet sure what form the ads will take.

Many media companies have tried and failed to create a model around high-quality content produced at scale, yet his company is well on the way to succeeding at that, via the robust contributor network.

What’s also working in The Mighty’s favor is its audience -- not just large but a prized one. Between 75 and 80 percent are women. Plus, the premium for advertisers around health-related content is especially high, according to Porath.

“We’re playing in a top-tier space,” he says.

The long shelf life of the stories on the site will be key to The Mighty’s success too. A standard news story or feature will often hold the public’s interest for a few days max, while The Mighty’s posts are “just as relevant a few years from now,” its founder says.

Images courtesy of The Mighty