In the age of social media, reporters on the scene of a news story face increasing pressure to produce fast, compelling tweets and status updates for their publications.

This creates a challenge: How do you generate content while still reporting?

I found seven mobile apps that can help reporters quickly produce compelling photos, video clips and other visuals that draw readers in — and encourage them to come back for more.

I call this “cotton candy content.” It’s light to produce and easy to distribute and sometimes gives readers a pleasant buzz.

These iOS apps allow reporters to take raw material and easily create fresh content in under 90 seconds and share it to the web.

360 Panorama – Easy-to-use photo stitching app. 360 Panorama lets you gather 360 degree images and quickly share them. This is an ideal app to gather color — a disaster scene, sidelines at a football game (as this one was by a reporter from KOMU-TV in Missouri). Unlike the iPhone’s ‘panoramic’ function in iOS 7, it doesn’t flatten the image into a long horizontal. 360 allows the reader to scroll around in a “circle,” which is a bit more interactive and has a moderately larger “wow” factor.

ChartMaker Pro – Nothing fancy here, just a good solid chart-making program. Covering a government meeting and have lots of stats? ChartMaker Pro allows you to build a bunch of different kind of graphs on the fly, then gives you the choice of sharing or saving the output to the Camera Roll. If you share it, it tweets as an image, which gets more views on Twitter. If you save it to the Camera Roll, you can add some of the below apps to create a much more immersive chart.

Diptic – Diptic’s a simple photo framing app. It lets you build collages by selecting a template, tapping photos to 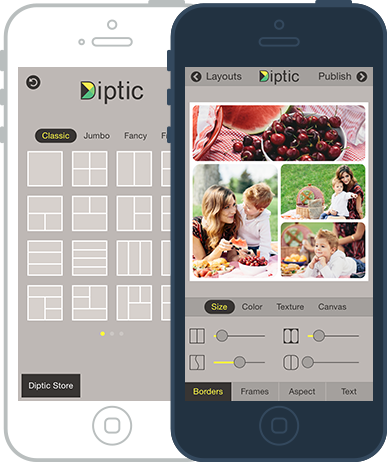 go in there, reorganizing as needed and then publishing. Diptic’s strength is in its simplicity and the fact that it saves to the Camera Roll, which allows every other image app to access it. It’s a building block, but a valuable one, since it lets you quickly create an image made up of images and then apply some of the more advanced features from JamSnap (see below) or StoryByte (also below).

Type A – This is an obscure app (seriously, it’s almost impossible to find in the App Store unless you also search on the developer’s name: Adrian Tirteu) that lets you add text to a photo and save it as a single photo. You can output to the Camera Roll or to social outlets. The biggest advantage here is that it helps you circumvent the 140-character limit on Twitter. You can write a full, contextual caption and incorporate it below the photo, then use your 140 characters to promote what’s in the photo.

JamSnap – This app allows you to create interactive sound points on a photo. You’re already gathering the sound anyway and you’re taking the photos. JamSnap allows you to take sound in your phone or iPad’s library and then create interactive dots on the photos so your viewers can hear the sounds. The first iteration only allowed photos to be integrated with sound gathered at that moment. The developer, Mayank Sanganeria, worked with a number of mobile journalists to mold the product to their specifications. Note: It’s been kind of crashy lately, but Sanganeria is working to rebuild it.

StoryByte – Online slideshows build viewership. StoryByte’s a free way to replicate that from your Camera Roll in the field. It’s pretty straightforward: Select the photos, type in captions, select the sequence of the photos, upload. You have the ability to share and it will also create a link to StoryByte’s servers. Here’s an example from KOMU, used in the local NBC station’s Friday night football coverage.

ThingLink – This one is my all-time champ. I love ThingLink, since it lets me build interactive graphics right from the field. The app allows users to embed video, photo or outside links into an existing photo. It’s fast and easily shareable. Doing it right takes a little bit more time than 90 seconds, but if you have the time, you can create powerful images that can go directly to the web or can be embedded.

Judd Slivka is an assistant professor of convergence journalism at the Missouri School of Journalism. Previously, he worked as a reporter at the Arkansas Democrat-Gazette, the Seattle Post-Intelligencer and The Arizona Republic. Follow him on Twitter.

This post originally appeared on the American Journalism Review and is republished on IJNet with permission.